Ways to Resolve the Dreaded Flinch 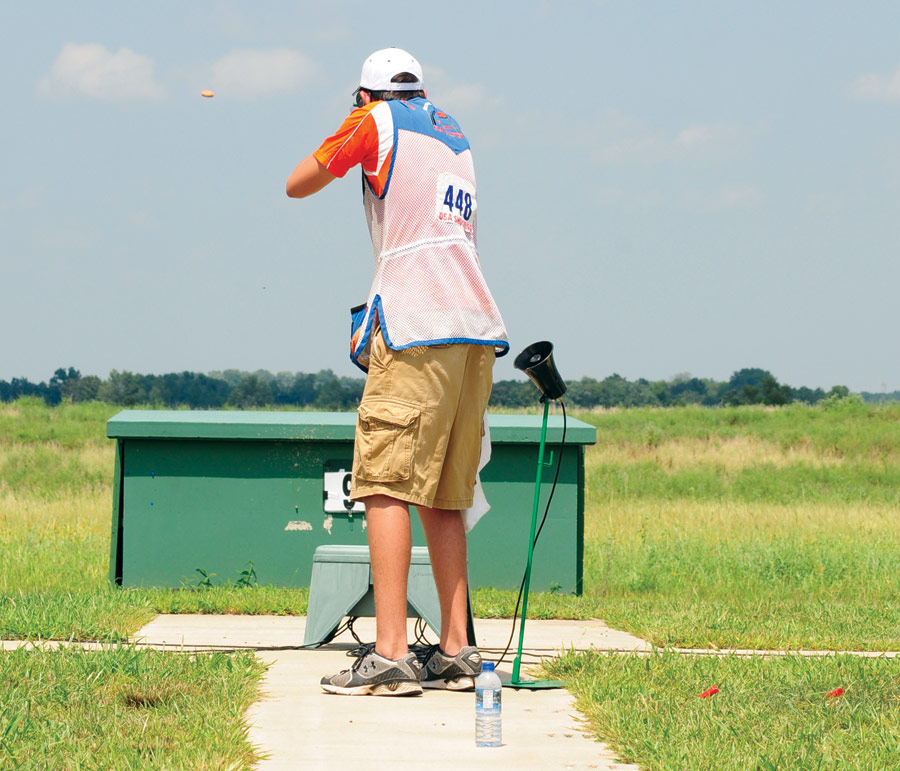 Ways to Resolve the Dreaded Flinch

Does this scenario sound familiar? You started shooting clay targets about a dozen or so years ago, and your desire to improve has made you a very competent shooter. On most days you can hang in there with the most-skilled competitors and, every once in while, you come out on top. Then all of a sudden one day you go to shoot an easy straight-away target, and your mind will not let your finger pull the trigger. You shake that off as a fluke occurrence and finish shooting the rest of the day without it happening again. Two weeks later the same thing happens on two different occasions on the same day. The following weekend it happens four times while shooting 75 targets. While driving home from the range that day, you admit to yourself that somehow, someway, you have developed the dreaded flinch.

This situation happens to countless shooters each and every year. And, the first thing that goes through their mind after they admit to themselves they have developed a flinch is trying to figure out a way to get rid of it. Before exploring methods on how to eliminate, fix and/or work-around this newly adopted flinch, a shooter needs to understand what it really is.

Truth-be-told, there may be countless reasons why someone develops a flinch when shooting. However, 90+% percent of the time a flinch is due to either physical or visual reasons. The physical being associated with recoil. The visual being the correct lead was not clearly recognized at the time the trigger wants to be pulled.

Let’s investigate the visual aspect first. When someone has been shooting for many years, they get used to seeing things a certain way — be that the flight of the target or the relationship between the barrel and the target. So, when the brain does not see things the way it wants to, it panics. Here are some examples:

(1) When shooting trap, if the target is obscured by the barrel as it leaves the house, and the eyes do not pick it up when they should, the brain will start to panic. This panic could result in an erratic gun movement, whereby the anticipated barrel-bird relationship is not obtained. The brain knows something is not right with what it sees and, as a result, either does not pull the trigger or spasmodically pulls the trigger (because that is what it knows it has to do when a target is in flight) even though the barrel is nowhere near the target.

(2) A right-handed, two-eyed shooter develops an issue whereby their eye dominance shifts during the shot sequence. This is not as uncommon as it may sound. Older shooters may have a tendency to have this as they approach 50 years of age. The problem is almost all shooters do not know this is occurring. When this does occur, the brain will get the primary sight picture through the left eye after the shift. What it will see is the barrel pointing three feet to the right of the target. The brain knows something is wrong since the barrel was lined up with the target just a split-second ago, so it refuses to pull the trigger or it tries to very quickly correct the barrel-bird relationship, whereby shooting late and to the left of the target.

Correcting the first situation described is somewhat easy. A shooter can lower their hold point (even going down as low as right on the house), so there is no way the target can be obscured. The second situation is trickier. One option (which I do not recommend) is to close the left eye and become a one-eyed shooter. A second option is to put something on the left lens of the shooting glasses to block the vision of the left eye when both eyes are open. Another option is to install a rail-like device on the end of the rib which essentially blocks the left eye from seeing the bead when the dominance shifts mid-shot. A few years back I had a student who developed an intermittent flinch which grew worse over time. When he was at his shooting club one day, he tried someone else’s gun which had a rail-like device on the end of the rib and for the first time in a long time, he did not flinch. So, he purchased a similar device to install on his gun and to this day his flinch is all but gone.

From a physical perspective, flinching usually comes from fearing the anticipated recoil when the shot is taken. The body’s aversion to the recoil of the gun due to poor gun fit may be the source of constant flinching. A gun which is properly fit to the shooter, combined with a shooter who properly mounts the shotgun, can significantly reduce the amount of felt recoil. Albeit, there are some shooters who have shot for so many years they are prone to anticipating recoil which causes them to flinch even with the lightest loads, a properly fit gun and/or recoil-reduction devices.

Since the human body tenses right before it is about to feel pain, it associates tightening of muscles with the anticipation of discomfort. With a traditional trigger, in order for it to be activated, it requires the finger resting on it to tense and tighten for the shotgun to go off and thus produce recoil. Therefore, in order to avoid this discomfort of the recoil, a shooter will not pull the trigger. What often occurs is that at the time the trigger should be pulled, the upper body jerks, typically forward, and the gun doesn’t fire and the shooter may have to take a step forward to keep his balance. What has happened is the body normally anticipates the firing of the shot and counteracts the recoil of the gun with resistance or an opposite movement.

During a “normal” shot when the gun actually does go off, this recoil resistance is not very noticeable. However, if the gun does not go off as expected, the body still expects the recoil and provides the resistance. A commonly used device to interrupt this pattern is the “Release Trigger.” Whereby, instead of pulling the trigger with a curling action of your finger, a shooter will first “set” the trigger just prior to calling for the target (by pulling back slightly on the trigger) and “release” it by straightening out their finger when they want the shot to happen. This straightening of the finger causes the muscles in the finger (and the rest of the body) to relax. This breaks the pattern of associating tensing up in preparation for discomfort.

Squeezing the trigger like you would on a rifle also contributes to a flinch. This technique is often times too sensitive for clay target shooters, as clay target shooters should employ a firm, crisp trigger pull. The squeezing technique can become too much like measuring the point at which the hammer falls. And, when the hammer does not fall at the instant the shooter thinks it should, the brain gets confused and then refuses to pull the trigger at all. To make this less of a factor, many shooters move the contact point between the finger and the trigger away from the finger’s tip and more towards the first joint. This will make the contact area less sensitive and require a firmer pull.

Throughout my shooting career I have seen many, many shooters quit the clay target games after developing a flinch and not discovering how to deal with it. I recommend the following approach for resolving a flinch: first try to determine if it is physical or visual. The easiest way to do this is taking the approach my prior student did — try to shoot a gun with the rail-like device installed and see if the flinch does not occur when shooting. If the flinch does not rear its ugly head when trying this gun, then there is a high probability it is visual and obtaining, and installing, the rail-like device on your shotgun may put the flinch behind you.

If this experiment doesn’t resolve the flinch, it could be physical. To resolve physical flinching problems the actual, and anticipated, recoil needs to be reduced or eliminated. The first thing that should be done is to get the shotgun fitted (or re-fitted) to you. A properly fitted shotgun will significantly reduce the amount of felt recoil. Many shooters get a gun fitted to them when they first become serious about their shooting and then fail to get it re-fitted…sometimes after shooting for numerous years and having undergone significant physical changes to their physique. This fitting can include the installation of recoil-reduction devices which are installed on the stock. Lastly, if anticipated recoil is still the root cause of the flinch, transitioning to a release trigger might be what is actually needed to put the flinch behind you.

If you find yourself in this situation, do not be ‘a statistic’ and quit something you really like without trying different resolutions. I am confident that with these tried-and-true approaches, the dreaded flinch will be a thing of the past. SS

Mark H. Taylor has over 40 years of shooting experience. He has won many regional, state, national and international clay target competitions. He is the author of the book Clay Target Shooting – The Mental Game and co-author of the book Break ’em All. Mark is a NRA Certified Advanced International Shotgun Coach and a High-Performance Shotgun Coach for USA Shooting. He is a Caesar Guerini and Cabela’s (in Thornton, CO) Pro Staff shooter, and teaches monthly beginner shotgun clinics at Colorado Clays in Brighton, CO, and travels nationally and internationally teaching coaching courses and working with world-class athletes. You can email him at coloradotaylor@gmail.com.