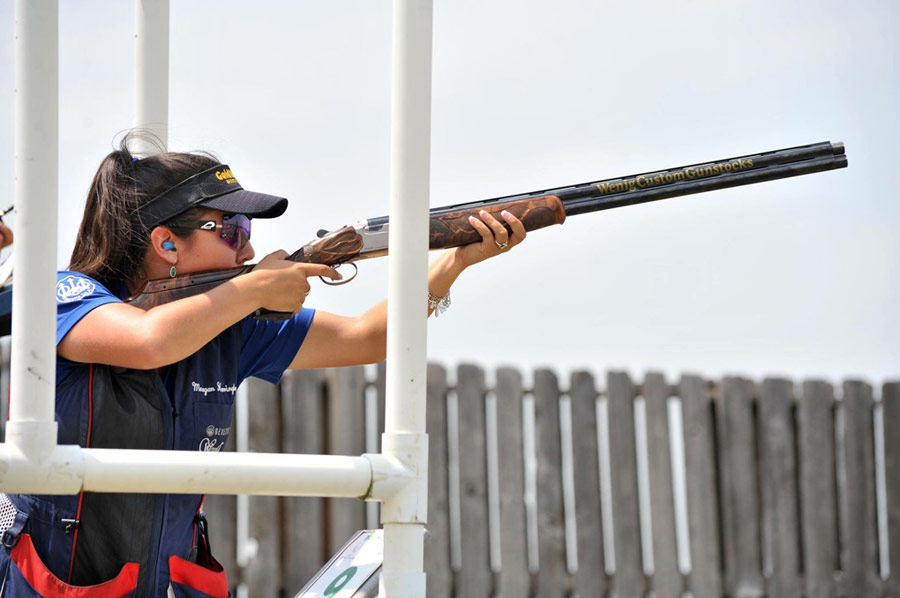 Meagan finished in the top five in all four major events in 2019, including the National Championship, U.S. Open, World Sporting Championship and World FITASC Championship.

Meagan practicing in her hometown of Corpus Christi, Texas. 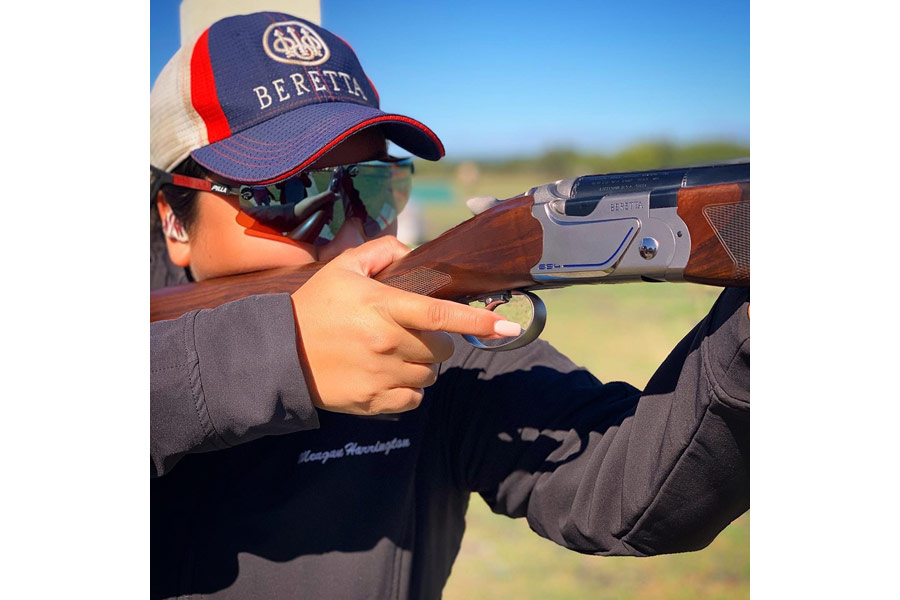 Meagan examines the Beretta 694 at its debut in the United States.
Photo courtesy of Christina Morgal 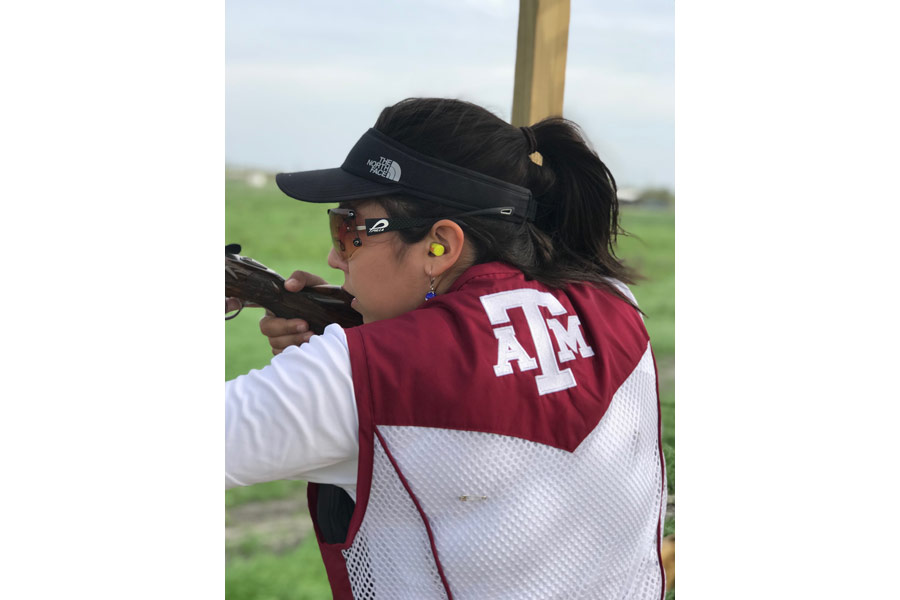 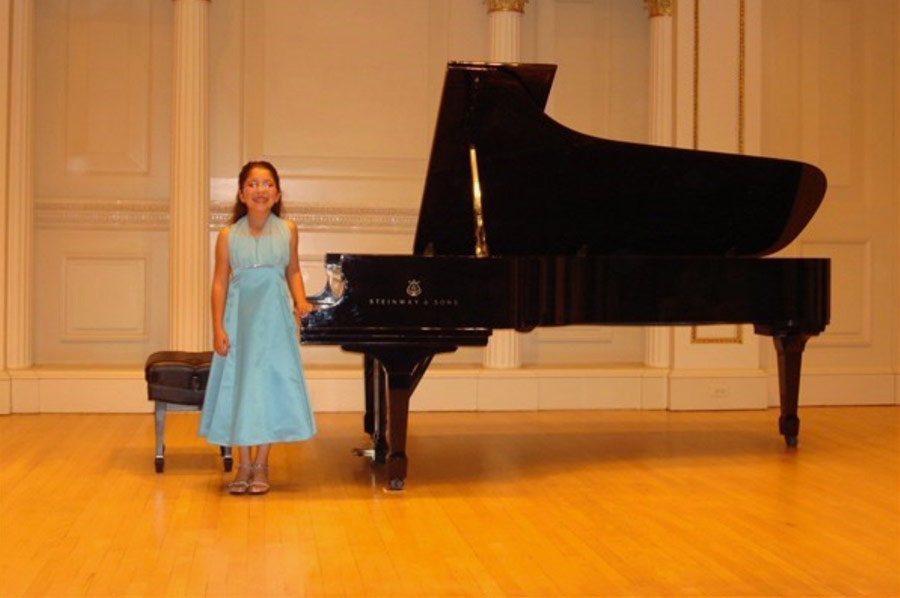 Meagan, who is 9 years old in this snapshot, performed twice at Carnegie Hall during her illustrious young piano career.

Meagan Harrington had a breakthrough season in 2019, rising quickly to the top of an impressive field of ladies that may be more competitive than it has ever been. After dominating in the 4-H youth shooting program, where Meagan excelled in trap, skeet and sporting disciplines, she decided to pursue a spot on the U.S. Sporting Clays Team, which she successfully achieved this past year after several impressive performances in major events. The 21-year-old Texan was born and raised in Corpus Christi and now resides in College Station.

Q: What led you to shooting sports?

A: I spent a year traveling to watch my brother compete in 4-H, and the next year I became old enough to compete, so my mom asked me if I wanted to try it. I don’t think anybody expected me to take it seriously, but she took me out on Station 7 of a skeet field, just shooting outgoers and incomers with a borrowed gun, and I loved it.

Q: What led you to become so dedicated?

A: I started playing piano when I was 5 years old through my school, and after realizing I had some potential, my mom found me a private teacher who introduced me to classical composers such as Chopin. From there, I started playing in international competitions where my performances gave me the opportunity to play at renowned concert halls like Carnegie Hall in New York. I then sought out master instruction in Italy, Poland, Austria and England to further my education. This took up the majority of my childhood up until the point where I began shooting, and realized I wouldn’t have time to do both. I chose shooting and, at that point I didn’t know any other way to compete in something other than to invest all of my time into being successful.

Q: You’ve shot a variety of shotgun disciplines since you began competing. What specifically drew you to sporting clays?

A: When I first joined Team Beretta, I was supposed to be a skeet shooter. The team manager encouraged me to interact more with the sporting clays team, so I got more involved in that community. After attending a few local NSCA shoots, I fell in love with the sport and have been pursuing it ever since. 4-H was also at a period in time where sporting clays was becoming more difficult, so in order to be successful I had to start devoting more time on the sporting course. By the time I was done shooting in 4-H, I was shooting a lot of NSCA events.

Q: Can you list all of the disciplines you’ve competed in?

Q: In addition to innumerous awards in individual events, you won seven Ladies HOA titles at the Texas State 4-H Championships. To what do you attribute your success in 4-H?

A: I attribute all of my success in 4-H to my mom. As a single mother, she went to every shoot every weekend with us. She took my brother and I to practice twice a week and invested as much money as she could into getting us the best coaching. Whether that was Olympians or world champions, she got me the best coaches in every discipline so I would develop as a shooter without any bad habits.

Q: Now that you’re primarily a sporting clays shooter, do you still shoot any of the other disciplines?

A: I shoot for the Texas A&M Trap and Skeet Team which competes in a collegiate organization called ACUI. We shoot pretty much the same disciplines as 4-H: skeet, trap, sporting clays and the international equivalent of each. The National Championship is 600 total targets, 100 of each discipline.

Q: Due to the cancellation of the event this year, you are still the reigning Ladies Collegiate National Champion. How much of your time do you normally dedicate to collegiate shooting?

A: Trap and skeet are pretty much muscle memory for me. It takes me about three weeks to get reacclimated and get my scores to a competitive level. Unfortunately, the collegiate season is short and overlaps with the Championship Tour events of the sporting clays circuit. So I practice as much trap and skeet as I can, but I’m primarily focused on getting ready for the sporting season.

Q: What are your career goals outside of shooting?

A: I’m studying to become a nurse anesthetist (CRNA) which calls for a lot of school. After graduating from Texas A&M with a degree in Public Health, I’ll attend nursing school followed by a CRNA program.

Q: As the face of the Beretta 694 in America, what can you tell us about the new gun?

A: Beretta really has a premium gun for a fraction of the price. The visibility is fantastic, and it's balanced perfectly. Beretta actually had some of their design team get our input early on, and it was really cool to see those ideas become a reality.

Q: At what point did you realize you wanted to become a member of the U.S. Sporting Clays Team?

A: Ever since I started shooting sporting clays, my goal was the highest possible level of achievement in the sport. I didn’t know much about the U.S. Sporting Clays Team at first, so I didn’t really understand that I would need to travel to major events to experience the highest level of competition in the nation as well as the different terrain and target-setting styles I would see on the Championship Tour. Once I grasped that, I started to shift my time and resources into traveling and trying to qualify for the team.

Q: At what point did you realize that dream might become a reality?

A: In 2018 I realized it was possible. I still wasn’t shooting at the level I knew I could, but I would have practices where I would shoot phenomenally. My coaches started helping me develop that potential into success, and 2019 is where I really made that transition and became comfortable competing at that level. At the U.S. Open, I only had my new gun for about a week. I managed to finish third and win the all-around event, so I started to think this could really happen this year. I started training as much as I could with school to stay on top of my game, and I was able to stay consistent throughout the year.

Q: You attended your first international competition at the World FITASC Championship in England. How would you describe that experience?

A: The atmosphere is like no other, it’s a whole different culture. I was amazed at the interaction of all these people from different countries. I thought it was going to be intense the whole time, but everybody was super warm and welcoming, and the camaraderie was just astounding.

Q: You led the World Sporting Championships this year in Chicago by four targets after the first day. What is the pressure like at the top of the leaderboard?

A: I had never really felt anything like that. I’ve been in pressure situations before, but there isn’t anything that can prepare you for the gravity of being up there with the world’s best shooters. I knew I was shooting well, but it wasn’t until I started hearing people talking and congratulating me that I realized how good that first round was. The second day wasn’t so bad, and I didn’t shoot nearly as well but was able to keep pace and stay in contention. The third day is when I felt all of the pressure in the world because I knew this was what everything boiled down to, and that was a lot to handle. I think it’s something you have to experience before you can really understand the magnitude of the situation.

Q: What do you consider your greatest achievement in sporting clays thus far?

A: Making the U.S. Sporting Clays Team. It was the culmination of consistent performances over an entire year of shooting, and so that’s probably what I’m most proud of.

Q: Due to the COVID-19 pandemic, the World Sporting Championship where you would have represented the United States in 2020 was cancelled. What was your reaction to finding out the event was cancelled?

A: Obviously I was upset, it took a lot of time, money and effort to travel and successfully achieve what I considered my biggest goal in qualifying for the team. Not to be able to compete and represent the United States was absolutely heartbreaking. But at the same time, the situation is so much bigger than me. People all over the world have been impacted, losing jobs, family members, and at the end of the day, it’s a far more important issue than a career setback.

Q: Assuming tournaments will be held in some capacity later in 2020, what are your goals for the rest of this year?

A: In light of the pandemic, my goals are just to enjoy the sport. I think we’ve taken the experience, the people and the camaraderie of our sport for granted. I never imagined at any point last year that the sport could just be taken away. Especially considering the time I’ll be able to devote in the future is questionable with nursing school, I just want to enjoy the time I can dedicate to this sport before other priorities come into play. SS

Dominic Gross is a student at Texas A&M University and has been shooting sporting clays for over a decade. As a 6-time U.S. Sporting Clays Team member, he is a professional sporting clays athlete and coach seeking to constantly improve his game and contend at the highest level of competition.