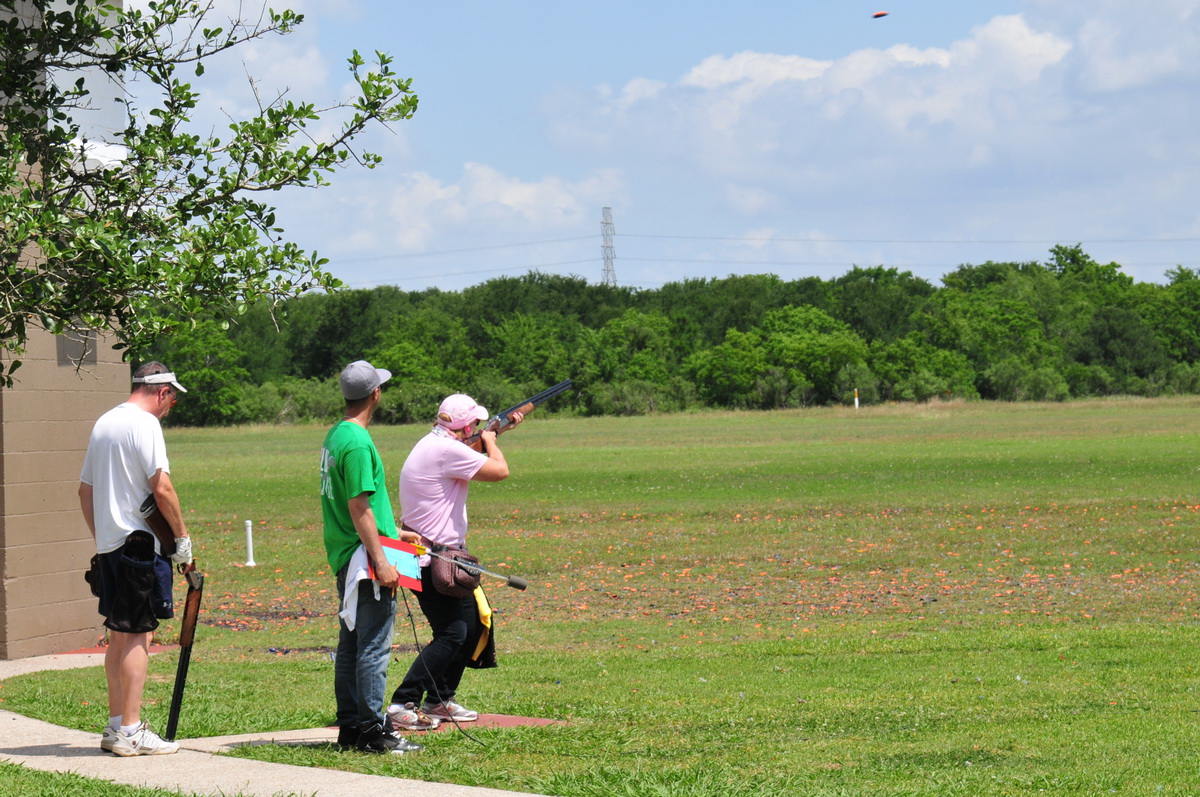 We all know competition shooting consists of the good, the bad and the ugly. And, if you are having one of those days in which everything seems to go wrong, the good is not very obvious.

“I never hit a shot, even in practice, without having a sharp in-focus picture of it in my head.” —Jack Nicklaus

We all know competition shooting consists of the good, the bad and the ugly. And, if you are having one of those days in which everything seems to go wrong, the good is not very obvious. Match stress messes everything up, and it will do it every time if we don’t prepare for it. But even if we do, there is the potential for disaster.

The main reason we develop mental training skills is to combat the effects of match stress, but all of the basic methods we start out with, relaxation, visualization, self-talk, analysis, etc. have other uses as well. The most powerful and least understood of these is visualization.

Simply put, visualization is directed daydreaming. It consists of thinking about a specific action, say shooting a target, in such a way as to invoke physical, emotional and technical responses in your brain and body. In its most powerful form, it takes into account the entire environment including such things as the effects of wind on the body, sunlight, etc. The visuals invoked can be from the point of view of the shooter or from the outside looking in. The more complete the picture, the more effective it will be.

That sounds simple. After all, we daydream all the time, but like all skills, it takes hard work and practice to develop visualization to the point that it is a useful and consistent tool. The better we get at visualization, the more automatic it becomes, and the more it influences match stress.

Competitive shooting is not a sport with opponents, unless you count yourself, of course. Because shotgun shooting is limited by the rules, random events or the actions of others rarely cause problems. Your performance is entirely up to you, which means you have to be precise and accurate, and you have to master your environment if you want to be successful. The skill of visualization allows you to eliminate a lot of the possible variations that can occur because it directs your brain and body down a specific path you have prepared before the competition. The most obvious use of visualization is in pre-shot preparation in which you can picture (in great detail) your near future action and prime yourself to make the shot. In this case, it is really important to practice not only the shot but the images you use in your preparation. Visualization needs to become as automated as the rest of your skills, as it works hand in hand with the technical and physical skills you have.

Early on, this skill is without specific and detailed aspects, just like all the other skills you learn. Some people are better at visualization than others at the beginning, but it is a skill most of us can master. The trick is to practice it until it a) becomes automatic, and b) you can trigger it by being in a situation, such as taking your shot in a match.

This type of visualization is called “cognitive specific” visualization, and it is most useful in the types of competition shotgun shooters engage in. You can often see it with basketball players when they shoot free throws — their lips will move, they go through the motions of shooting and they look at the rim intently before the shot, imagining the ball going through the hoop. The idea is to prime their body to shoot the shot perfectly, the way they practiced it thousands of times before. Golfers, kickers, skiers, track athletes and a host of others do this and have for a very long time.

At the highest levels, most of these athletes have an advanced understanding of visualization. At the Sochi Olympics, for example, the U.S. team sent nine sports psychologists and the Canadians, seven to help their athletes with such things as visualization. The freestyle snowboarders and skiers, who you would think would be almost anarchists in their thinking by looking at them, relied heavily on pre-run visualization to help prime themselves and to deal with match stress. In an interview in the New York Times, Emily Cook, an Olympic freestyle aerialist, spoke of how she and her coach write out “scripts” for her to visualize. She will go into an altered state of visualizing until her coach tells her she has 15 seconds to begin her routine. At this level, visualization has to be a highly disciplined and directed skill. At the highest levels, it is a precursor to “the zone”, an altered and automatic state the highest trained athletes strive for because it almost eliminates the effects of match stress. While the zone is rarely achieved, the triggering effect of visualization does help decrease the interference that match stress causes.

The secret is to make sure the picture produced is not only visually complete but complete in every other aspect, especially the kinesthetic and emotional parts of your shooting. To do this requires you have a complete knowledge of what happens when you shoot. To do this, you may have to rely on a journal and outside help.

There is a reason for this. If you are not well-prepared, match stress will introduce a physical or cognitive curveball that will inhibit the automatic shot process. The purpose of practicing and developing your visualization skills is to make sure you have these issues brought on by match stress in hand. Just imagining you can do well is not enough, in fact, it may be harmful if you are left with an unexpected effect from match stress. You have to include effects of match stress and methods to overcome these effects in your visualization as part of the whole package. You just don’t have to consciously experience them all in your pre-shot visualization if you practice enough and make the responses automatic.

Visualization is an ongoing process that must take place at every point in your practice and even at times specifically set aside for visualization practice. Beginners use visualization to practice basic technique and to experience and control the emotional aspects of shooting mostly by enjoying the visualization. As a shooter progresses, more and more details become part of the practice and visualization starts to be a tool for problem solving (that “bad” stuff I mentioned, the “ugly” should be obvious by now) and automating many other aspects of competition shooting. Shooters learn to incorporate other mental skills into their visualizations, too.

Take self-talk, for example. Self-talk is a skill used to counteract the maladaptive thinking that often accompanies match stress. This type of negative thinking is often predictive (“I’m going to miss”) if left unchecked. Stress prompts errors in thinking so that what usually happens in non-stress situations, such as practice, is not duplicated when needed. By anticipating and practicing fixing these distortions with self-talk, we can avoid the effects in the match. One of the problems is we don’t run into the situations seen in matches very often, so we need to find other ways to practice. This is where cognitive specific visualization comes in handy.

We know the better your skill sets are and the more you practice the more likely visualization will be helpful. What a lot of us don’t realize is this extends to the emotional side, too. For example, there are two well-known aspects of trapshooting that most of us will agree with: shooting in a well-oiled friendly group can make you a better shooter and shoot-offs are very stressful. While most of us have found this out from practical experience, there are some good scientific studies that show why these kind of events happen.

Studies have shown social interaction can decrease anxiety, decrease cortisol levels (cortisol goes up in stress situations) and increase oxytocin which enhances relaxation. In addition, a technique that relies on imagery for relaxation does the same thing to both cortisol and oxytocin. It’s not much of a stretch to think the social aspect of a good group of trapshooters may have a similar calming effect.

Visualization can be used to emulate these conditions and, if I read the papers properly, make these kind of hormonal changes occur in the short run. By visualizing what could happen in a match when stress occurs, you can then practice using a response or image, such as the trap group, to counteract what would otherwise occur due to match stress momentarily effecting a hormonal change. Again, you have to practice this in order for it to come up automatically.

The other scenario, the shoot-off, is a slightly different animal. Shoot-offs are rare unless you are in the top tier of shooters and, even then, can be tough at the highest levels of competition. By the nature of a shoot-off, you are going head to head against others who have the same score. The cognitive distortions I mentioned above will immediately cause you to think you will lose (this is an automatic thought that will come no matter what) or that the others are better shooters, especially if this is your first shoot-off. Visualization can help with this situation quite a bit, both in anticipation of the event and while you are in the shoot-off. YouTube can be very helpful with this, as there are plenty of international skeet shoot-offs available for you to watch what is happening to the shooters (they make lousy poker players). You can’t help but be empathic as they suffer through these events. And, you can take these images, apply self-talk and use them to prepare.

Visualization is the ultimate mental tool that incorporates all the others, especially when you are about to begin your shot in a match. Like all other techniques, it has to be developed, become more and more precise as you develop, and has to be used on a regular basis or it will not be helpful in a stress situation. It can be used to plan, to solve problems, to trigger automatic actions and to help mature tactics you use when you deal with match stress. It helps deal with a host of problems, and you can invoke it at any time since you don’t have to be shooting to use your imagination.

Try it and keep on trying. SS