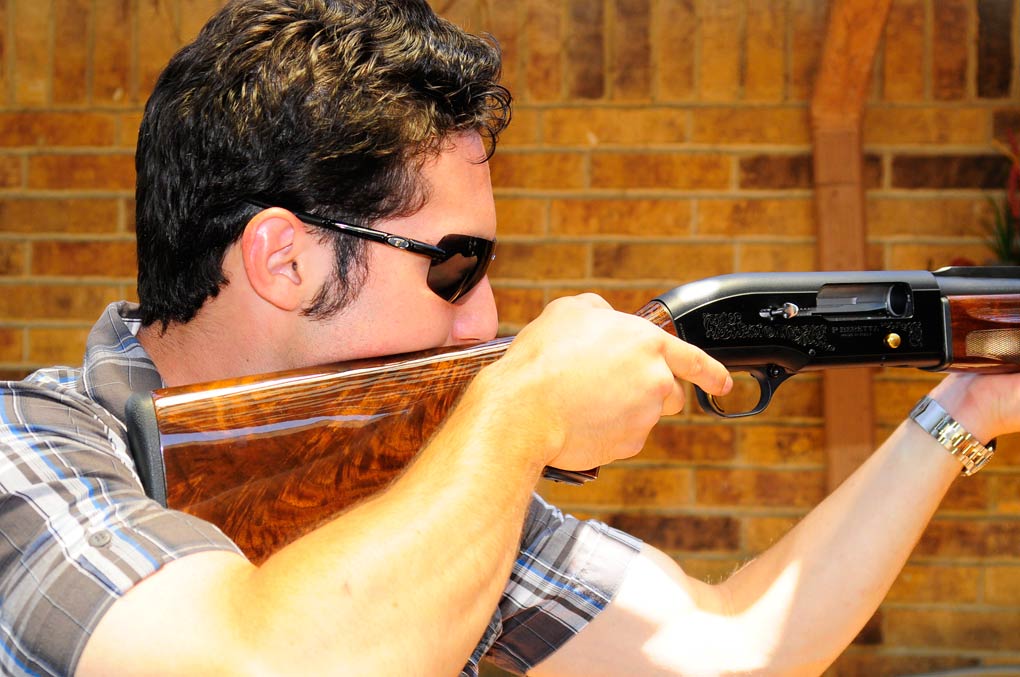 A number of studies have found a personalized pre-performance routine optimized performance in many different sports.

If you have been competing for any time, you probably have a pre-shot ritual. For most shooters, it consists of lining up your feet, choosing the start and end point for the shot, visualizing the path of the target, making a pass along the line of flight with an unloaded gun, loading and taking a deep breath just before calling for the shot — just like your coach taught you. For most of us, it is just common sense, it assures we will be in the right place to make the shot, that we are more or less consistent (especially if you are shooting trap or skeet), and it reminds us what we have to do in order to hit the target.

You just try to play tough and focus point for point. Sounds so boring, but it’s the right thing to do out there.
—Rafael Nadal

Now there is a growing body of evidence that shows how pre-shot rituals can improve consistency and performance in athletes. This is especially important in what are called “self-paced skills”, those activities like golf, shooting, free-throw shooting or place kicking that are (within rules limits) dependent on a consistent and accurate sports action. The studies also show how you perform your pre-shot ritual makes a difference, and that the content of the ritual is important.

The first study was a 2008 comparison of NBA players shooting free throws using film to determine how long they took and what behaviors were present during their rituals. All the players had some type of ritual, they would position their feet and arms, bounce the ball a set number of time, spin it in a specific way, look at the basket and do it in a specific sequence. The two authors looked at the duration of the ritual and the consistency of the ritual while comparing the results. The idea was to see if either variable made a difference in how well they shot.

The results were somewhat surprising, the duration made no difference at all, but consistency in sequence and relative timing did. When the individual players scores were compared using routine duration — how long it took to go through the routine — their scores were statistically the same whether they took their time or shortened the routine. When the players scores were looked at in relation to how consistent they were with their most common sequence of pre-shot rituals, things were different.

The authors determined if there was a “sequence followed” and “sequence not followed” with each free throw (example: bounce the ball twice, spin once, look at the basket, take a breath, bend knees, shoot) and when players did follow their sequence, they were successful 81% of the time while when they did not, they only made 71% of their free throws.

Many years ago I noticed the same thing with free pistol shooters and tennis players. Don Nygord, who is sadly gone now, and I developed a system in which we could tell when a shooter was tiring by how long it took to fire the pistol. If a shooter shot within certain parameters (a window of about two seconds) in his or her cycle, the shot was always very good — a ten or nine depending on the skill of the shooter. If the shot broke outside of this window, it either would be less than nine, or the next one would be poor. By following these parameters, a coach could tell when a shooter had to rest.

I found the same thing occurred when watching the U.S. Tennis Open with a friend of mine. I was able, with 95% accuracy, able to tell if a serve was good or bad by the timing of the pre-serve ritual. Tennis pre-serve rituals are actually part of the serve, and I suspect the sequence that was followed determined the timing in this case because otherwise it would affect the speed and spin on the serve.

It should be noted both my informal studies and the one mentioned above were done on elite-level performers.

In 2014, Jacob Blumberg wrote about a “naturalistic” study he did for his Master’s Thesis at Georgia Southern University that examined the same issues in college-level basketball players. He wanted to see if pre-performance routines would have a positive effect by reducing anxiety and helping the athletes focus better. He interviewed players on both the men’s and women’s teams, followed all of their home games and recorded all the free throws for further evaluation. He points out the pre-performance routines have a positive outcome in many sports, and there were many benefits to the practice. One of the findings he mentions is the positive effects of these routines varied with the skill of the athletes, but no matter what the skill level, the introduction of pre-preparation rituals always helped.

The findings in this study were the opposite of the study done on the NBA players. Blumberg found neither duration nor consistency of routine made a significant difference in free-throw percentage. So how do you understand these two studies (and others like them) when they seem to have contradictory findings?

The Georgia state study was interesting because all the players were interviewed about their routines and how important they were to each player. Each player stated that without the routines, they would not shoot free throws well. In addition, they viewed their rituals as part of the free throw, a part that not only helped them rehearse the action, but calmed them down. The routines helped them prepare for the next free throw, especially if they missed the first one. Pre-performance routines also made the shooter more confident, and none would shoot free throws without some preparation.

The results of the study were somewhat disappointing, as none of the subjects were able to reach the 90% level of consistency for duration or behavior set at the beginning. As a result, the initial question of whether or not behavioral consistency or duration was more important was not really answered. But a number of other things stood out that offered clues to how pre-shot rituals help and how they seem to work.

In the first place, the subjects used were not very good free-throw shooters. The men’s team ranked in the 25th quartile of free-throw shooting in the NCAA Division 1 standings that year with 66% success and the women’s team shot 72%. Second, the consistency level (90%) was very high, which made meeting that criterium very difficult, so the odds of learning anything about the original question with this group was small.

But it did allow for other observations which I think are more practical for the average shooter.

Blumberg asked about how the players developed their pre-shot routines and to explain what their routines were. Their answers were consistent with how shotgun shooters act on the line: they started when the referee handed them the ball, they aligned themselves to the basket, they often used self-talk and visualization along with relaxation. These mental skills are common with almost all self-paced skills, and numerous studies have shown the use of these skills improves performance.

The physical components of the pre-shot routine were also noted to be important. In basketball these include handling the ball, a shooting motion without the ball, dribbling, breathing, etc., which triggers the brain to prepare for the shot by activating the working memory. The athletes in the Georgia Southern study were able to tell the researcher the exact sequence of physical and mental tools used in their ritual.

I’ll diverge a little and talk about working memory which is the faculty of the brain to use memories to help with decision-making. We know from psychological studies and imaging experts are able to use past memories through a complex and rapid use of various parts of the brain. The central control panel seems to be in a part of the cerebrum called the hippocampus, but the cerebellum is also deeply involved. You don’t have to be a brain scientist to understand this process (no one understands it fully), but we do know relaxation and pre-performance preparation triggers this action in the brain and we can develop it through practice and experience.

I mention this because when Blumberg asked the basketball players how and why they used a pre-shot ritual, they all reported they saw others doing it and how well they were performing. Many had a coach or parent teach them a ritual which they later personalized after trying out several iterations. Each player made changes until they found something that helped them feel comfortable on the line. They took the standard free-throw technique combined with some basic mental training tools and kept adding components until it felt right for them. Many athletes found when they added a physical aspect to their routine, they found it was complete.

A number of studies have found a personalized pre-performance routine optimized performance in many different sports.

Pre-shot rituals increase confidence, enhance relaxation, allow the brain and body to use working memory to help define the shot and make you more consistent and confident. As your skill level develops, you will find that not only does your routine improve, you become more accurate and precise as the transition from prep to shot becomes seamless. SS

Dr. Keyes has written over 250 articles on mental training for Shotgun Sports and is author of the book Mental Training For The Shotgun Sports available on page 50. He is a former physician for the U.S. Shooting Team, retired Colonel from the Army Reserve and a veteran of Viet Nam and Desert Storm. A Tennessee state pistol champion and coach of several national championship teams, he is retired from his practice in Fond du Lac, Wisconsin. You can e-mail him at: michaelkeyes12@gmail.com.