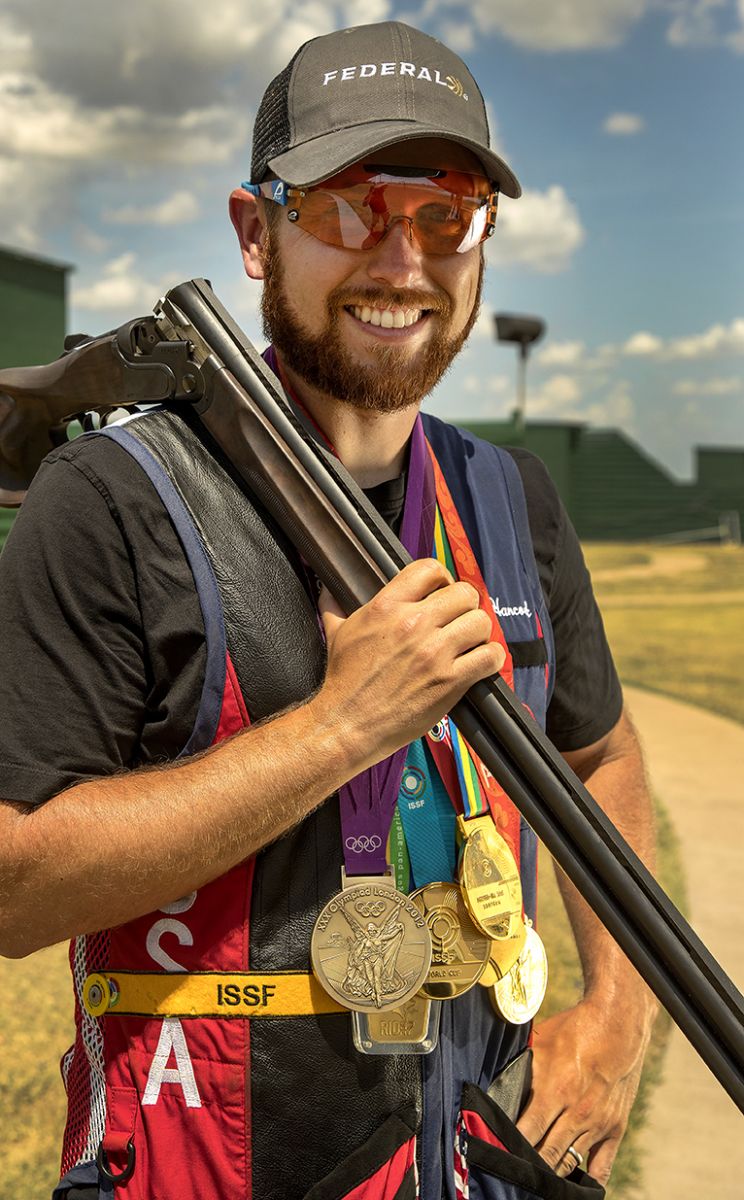 In the case of international skeet, those favored shooters are usually Vincent Hancock (pictured) and Kim Rhode. For viewing audiences, this sets the drama in regard to the other shooters.

“Everyone has a plan until they get punched in the face.”

One of the geeky things I like to do when I get in front of my smart TV is watch ISSF videos of international skeet world cup events on YouTube. Because the international body is trying to make these events more interesting for viewing audiences, they have changed the way the medals are given out. In addition to targets that look like they explode, they have added a reality TV/soap opera flavor to the finals that includes drama, rivalries and unexpected turns of events. Or at least they hope it looks that way.

For those of you not familiar with how these finals work, here is a little summary. Six shooters survive the main event of 125 targets either by score or shoot-off. In the case of international skeet, they shoot doubles at three different stations to determine the final winners. The competitors shoot two rounds and then are sorted out; the shooter with the lowest score is eliminated. If there is a tie at each break, then their main event score determines who is eliminated. This goes on until the medal rounds where there is a sudden death shoot-off if a tie exists.

At the ISSF level finals, shooters are the best in the world. Even then, there is a distinct hierarchy as the finishing positions in the main event determine who wins ties until the medal rounds. The way the finals are set up there is usually one shooter who is favored while the rest are the underdogs. In the case of international skeet, those favored shooters are usually Vincent Hancock and Kim Rhode. For viewing audiences, this sets the drama in regard to the other shooters.

The upshot is not only do the shooters have to be perfect; they have to contend with the extra stress of an announcer telling them what they have to do, the fanfare, the rules. The drama and the stress of staying in till the end. The first one to make a mistake is often the first one out.

This is due to a cruel aspect of the finals rules. Assuming all the shooters are perfect through the first two rounds, you can still be eliminated even if you don’t make a mistake.

But that’s not the way most competitions work (including these events). Most shooters are prone to error or mistakes during a match primarily due to match stress. I brought up the ISSF events mostly because they tend to have the most match pressure, and it is fun to watch how these master level shooters cope with it.

You might have noted I make a distinction between errors and mistakes. I do so because, while the terms are often interchangeable, there is a significant distinction that has to be made. The reason why this is important is a shooter has be able to assess what went wrong if there is to be a Plan B that might save the day or if it will help save another day.

While these definitions may be a little arbitrary, they are fairly easy to grasp and understand. A mistake is a decision the shooter makes due to poor judgment, lack of concentration or distraction. An error is due to basic ability and training as in “margin of error.” Neither is bad, but neither is good for your performance either.

One way to understand how these interact with your shooting is to visualize or draw a Venn diagram. Venn diagrams are graphic depictions of interactions. Think of two circles overlapping. Each circle contains an idea or group of people, whatever. An example is the population of the readers of this magazine and persons who have concealed carry licenses. When you add the two groups together, there will be outliers on each side. Those who are in both camps are in the intersecting area. This is a simple example that is easily drawn. It can get more complex as there may be more than one circle or the circle may be highly distorted and changed. That last bit about distortion is what is important when it comes to mistakes, errors and Plan B.

Back in September, 2019, I was able to see one day of the 43rd U.S. Open Skeet Championship at the Rochester-Brooks Gun Club. I expected to see very good scores from the top shooters but what surprised me was watching shooters who were not just average, but well below average shoot in the event. At first I was taken aback a little, but then I realized there is no better way to learn about stress than to shoot in a high-end match like this.

It was clear some of these shooters were not prepared technically or mentally to shoot, and their skill set was both small and incomplete. A Venn diagram in their case would be a skeet circle that included 25 targets and a squiggly enclosed area that was missing a lot of completeness and interacted for eight to ten targets at best. While mistakes were probably made, the vast majority of misses were within the margin of error for these shooters.

On the other hand, I saw shooters who shot an occasional 24/25 but were otherwise perfect. Unfortunately for them, if they were in the AAA class, they were out of luck for a medal but they still had a Plan B to fall back on, one that boded well for the next match. (Unless it was the .410 event, in which case Plan B might have a different look.)

Plan B is what happens when you get a metaphorical punch in the face. Something happens that puts you off of your plan and upsets the natural flow you expect in your shooting. Basically, there are two forms of Plan B: panic or don’t panic. The first one doesn’t help very much, and it eliminates the positive part of the experience — learning from experience.

The thing about Plan B is it really has to be a plan. When Mike Tyson made that quote he was referring to an upcoming bout with Evander Holyfield. It was a boxing match, so face punching was a thing. The same is true of competitive shotgunning. Things go wrong either due to error or mistake, and these things affect performance. At the highest ends of the sport, mistakes (not errors) happen, lower down and in the middle it can be both with errors prevailing. It is up to the shooter to determine which ones are present and have a Plan B to cope.

This is where it gets tricky. If a miss is within the margin of error of a shooter under stress, Plan B requires having a method of dealing with the stress by a practice routine that deals with both developing a more automatic shot and having a better way to handle stress. Most of the time when a problem occurs in a match, there will not be an immediate game-winning tactic to bail you out. If you don’t have the basics of shooting down pat in a way that allows you to “just shoot”, Plan B involves developing one.

Being an intermediate shooter is not a bad thing, of course, but you have to be able to determine what has to be done in order to improve. It can be solidifying basic technique, inoculating yourself against stress or all of the above, including a host of things that have to be improved on a measured and regulated basis.

On the other hand, high-level shooters are more likely to commit a mistake under stress and are going to know exactly what happened. Plan B in this case is to eliminate mistakes for the rest of the match by dealing with the technical issue and mitigating the stress using a technique that they have developed for this purpose. Mistakes are correctable on the spot, as they are a deviation from established technique caused by stress. The match may have been lost due to a mistake, but the one thing about mistakes is if you pay attention, you won’t repeat them. Errors, on the other hand, require a tightening of mental, physical and technical parts of your shooting.

Everyone needs a Plan B. At every level of shooting, stress has a tendency to disrupt Plan A, and it occurs no matter how much faith you may have in Plan A. How you utilize your Plan B is up to you, but it should not only help you in the match but have a long-term capability that involves an objective assessment of what happened and a method for improvement that narrows the margin of error and/or eliminates mistakes. Much of what you do has to include how to handle stress. This is important for avoiding the punch in the mouth and minimizing the effects when it happens because it will happen at some time.

What is most important is to find out why you need a Plan B, whether it is due to mistakes, errors or both. That way you will be able to find answers beyond the usual “you shot behind it” and progress in becoming a better competitor. A loss should be used as a learning experience that improves your Plan B. SS