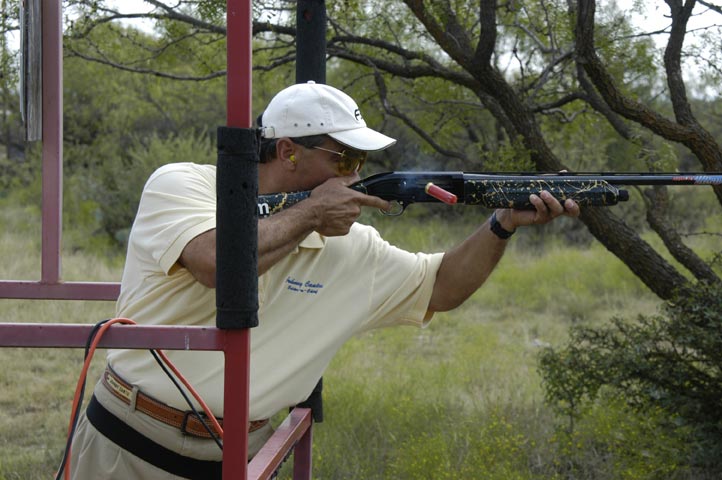 “We are all products of our past, but we don’t have to be prisoners of it.” —Pastor Rick Warren

When I was in college, I was exposed to a math problem called the “Birthday Paradox” which showed if you randomly selected 23 people there would be a 50% chance two of them would have the same birthday. If you chose 70 people, the chances were almost 100%.

While this is an interesting fact, you might wonder why it is important for shotgun shooters. The proof for this theorem relies on the fact you are not trying to match up people as much as you are trying to avoid them being matched up. Since 23 people compared with each other yields 253 possibilities (23 X 22 divided by 2 = 253, trust me), that’s over half the number of days in a year. Even if you don’t follow the math, it’s a bet you can make with some certainty, especially if the number is 70.

The interest for competitive shooters has to do with training, especially learning the basics and building on them to become an expert shooter. Ideally, a person should learn to shoot in the most efficient and accurate way possible using various rules (“eye on the rock, head on the stock”) to guide them and using a coach as much as possible. Then we practice a lot doing things the right way.

But that’s not the way most of us learned to shoot.

Most of us saw others shoot, thought it looked like fun and then found out we could be successful at hitting a moving target. Those who had raw talent would continue to shoot and, at some point, would inquire as to what could be done to shoot better. Lessons didn’t occur until after we had been shooting for a while for pleasure.

There is nothing wrong with learning to shoot this way. In fact, it probably makes a person more motivated and certainly increases the fun factor. But it can introduce little errors that don’t get changed, which can be a problem down the road.

If these little errors go on for very long, they become inborn. Inborn errors have the nasty habit of biting you in the heinie later on.

Starting in the 1960s every child born in a hospital in the United States was tested for a disease called Phenylketonuria or PKU. This is a nasty disease which is a result of an inherited inability to metabolize an amino acid called phenylalanine (Phe.) The result is that Phe accumulates in the system and poisons the body, resulting in a number of significant problems. About 12,000 children are born every year with this illness. One of my best friend’s sons has it.

If it is identified early, say at birth, there is a treatment which involves a strict diet for at least ten years and possibly a medication. This is especially true in the first years of a child’s life. With treatment, a person can live a normal lifespan.

That one little glitch in a metabolic pathway can have enormous effects. The same is true of some glitches in early training in any sport including competitive shotgun.

When people try to learn new motor skills, they make mistakes. Most people engage in trial and error at first using the obvious marker of a broken target as the goal. If you hit the target, you must be doing something right. Most of the time that is true, in part at least.

The odds of having a perfect layered training experience that does not have some significant errors is pretty slim as the Birthday Paradox shows us. If you consider there are hundreds of little things you have to do to meet the goals of shooting and you have to do it under stress, you can see introducing errors is inevitable.

There has been a movement in education called “Discovery Learning” in which a student has minimal teacher guidance and is encouraged to use prior experience to find solutions, more or less on their own, while the teacher points them in the right direction. There is a lot of controversy about this technique, mainly because children are required to come to conclusions or find solutions with very little assistance. In young children, the research showed it was ineffectual because children did not have a fundamental understanding of the problems and became frustrated.

On the other hand, learning by rote leads to a very narrow ability to solve problems. If the presenting problem was not within the parameters of the rote learning, the student has the same problem of lack of fundamentals due to not understanding how things fit in.

Learning to shoot a shotgun is a skill that can be taught fairly easily but using that skill, which is what a competitor does, is entirely different. Improving in shooting sports requires learning advanced skills which, in turn, needs the ability to parse out what is wheat and what is chaff before this can occur in a reasonably fast manner. This is a process called metacognition or the ability to know what you know and be able to use higher-level thinking skills to improve.

While this sounds difficult, it really isn’t. Shotgun competition is not an open-ended entity. We can pretty much learn all the knowledge needed in a short period of time (if motivated, a lot of shooters don’t seem to know the rules of their sport), and the physics of shotgun shooting is relatively simple to understand. In sports, like skeet, we know where the target will be, the speed and size of the target and what techniques work best. The problem is doing it.

Here is where the problems with the usual way of learning shotgun shooting comes in. Most of us gained our knowledge by using discovery learning or by rote. When we were taught to shoot, we were given rote instructions. We learned by not leading enough we shoot behind the target and are very good at diagnosing the issue, but we have a much harder time doing anything about it.

Early on, persistent errors are introduced. Knowledge is not the problem. It’s well-known the very best and the middle of the pack have about the same knowledge of any skill; it’s the doing that is different. Early non-critical practice can introduce little errors that become big ones as time goes on if not dealt with.

Children with PKU don’t have a chance to lead normal lives, but their parents have the knowledge and motivation to make things as normal as possible. My friends whose child has this issue have done everything they can to make sure he is healthy and normal. Now his son is an adult who did well in college thanks to the efforts of his parents, but he has to maintain a discipline that none of his peers do, especially around his diet.

Shooters who have these inborn issues related to their early training may have to do a similar amount of work in order to advance in their sport but, unlike PKU, the errors can be corrected. There are ways to deal with them that are effective. One of them is something called guided-errors training.

In 2017 a group of scientists studied college students who were learning a new game, pétanque, that required specific throwing skills. After letting the students play with the game in a random fashion, they divided them into two groups. One of the groups was shown the “correct” throwing technique while the other group was observed for errors and then shown what they were doing without demonstrating the “correct” way of doing things. After that, they were given a 40-minute practice time in which the instructors helped them identify the errors and let them figure out the best way to throw.

The other group practice focused on replicating the teacher’s movements, and mistakes were either ignored or corrected without telling them why.

The error-guidance group ended up with better accuracy and a far better understanding of why mistakes were made. Each error-guidance student was able to adapt a technique that was both precise and accurate for himself.

Each group had one thing in common — they both had instructors. But what happened to each group was profoundly different. The error-guidance group was given the opportunity to make mistakes and then learn from them in a way that encouraged metacognition and eliminate setting the errors in stone. This training gave them problem-solving tools the others didn’t have. So when the final exam came with its attendant stressors, the error-guidance group was able to cope significantly better.

Another study took golfers who persisted in making the same mistakes and, instead of correcting them by telling the golfer what to do, they had them exaggerate the technical error until it was extremely obvious. This group was able to minimize the errors later on, possibly because they became so aware of them the experience allowed them to change.

Learning from mistakes (with a little help) made all the difference, but it could only occur in an environment that allowed mistakes to be made and then encouraged change for the better.

Errors are inevitable when you start out. It is very important to automate shooting skills for competition and make sure they are as flawless as possible. But there has to be an ability to recognize and solve any problems that occur. Unlike PKU, these errors can be changed but only after they are recognized and a way to change them is found.

The latter is important because many people know what is wrong but not as many know what to do about it.

Analysis, finding a solution, putting it into place and acknowledging the solution is changing something is very important in the process of improvement. Just knowing what is wrong is not enough, you have to find ways that work if you want to change what may be a deeply engrained error in your shooting.

Learning to change for the better is a skill like any other. You have to practice it and put it to use or it will not be there when you need it.

You may not be able to change every automatic response you find to be detrimental to your shooting, but you can learn to minimize them or learn to recognize them in the situations where they hurt your performance while finding counter solutions. This happens a lot when dealing with match pressure. You learn to know your automatic responses (which may be due to early training) and deliberately use another method to deal with it.

Basic errors are universal in any training regimen. Often they are the reason why a person can’t advance at the rate he wants. By identifying the errors and then finding a way to change that gets to the emotional and habitual reasons why they persist, you will be able to get better faster. SS