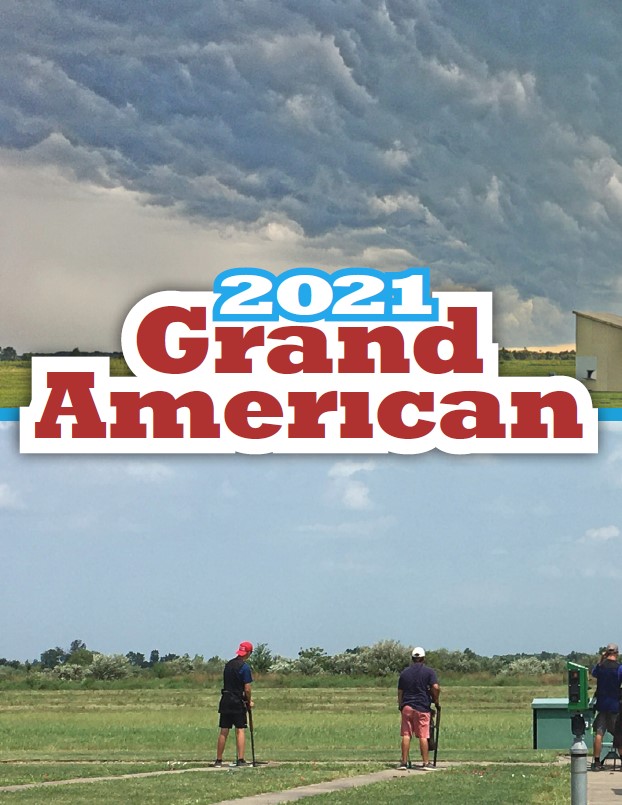 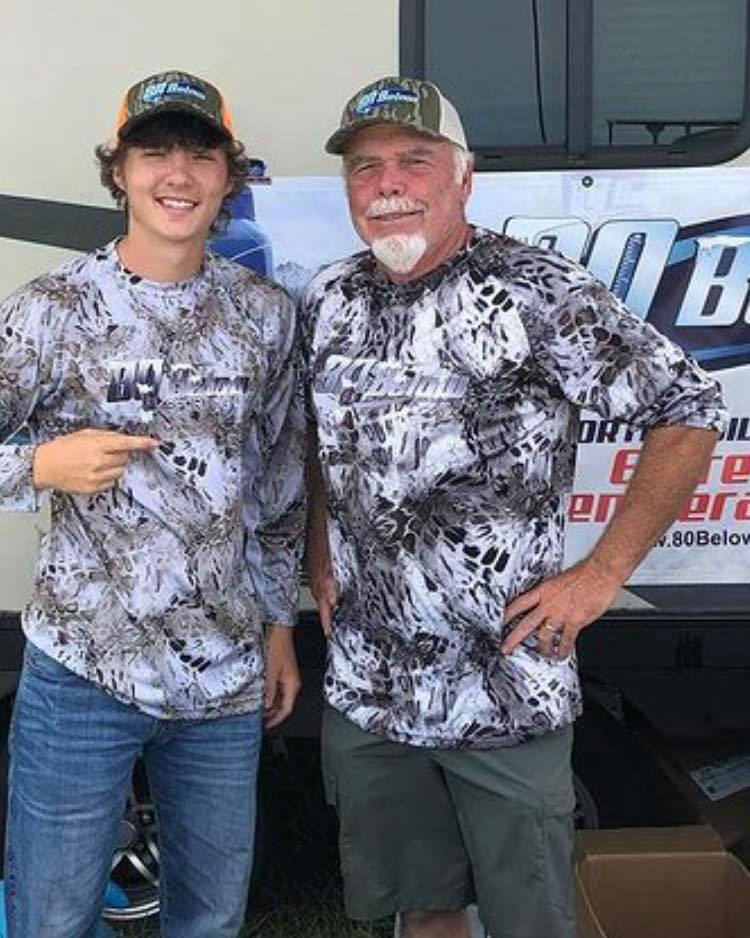 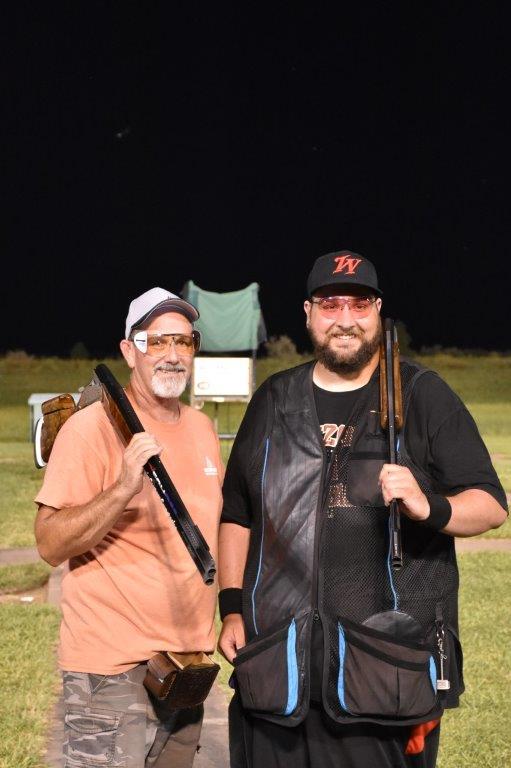 Matt Bartholow of South Dakota (right) won the ATA World Doubles Championship in a marathon 11-round shoot-off with Sean Hawley of Utah after both All-American shooters scored a perfect 100x100 in the main event. Sean just completed his 100,000 doubles target attainment with over a 97% lifetime average!
After the Grand American, Matt told Shotgun Sports: “This year’s ATA World Doubles Championship really meant a lot to me. I got to shoot off with one of the greatest doubles shooters ever. It went a long time and there was some back and forth in the shoot-off, so it was exciting.
“I’m very happy to have placed Third in this year’s Singles CTC,” he continued. “We shot that off immediately after the Doubles championship shoot-off. I was already very tired out, but had a job to do. I’m very satisfied I was able to stay in the zone long enough to earn a high place in that event as well.” 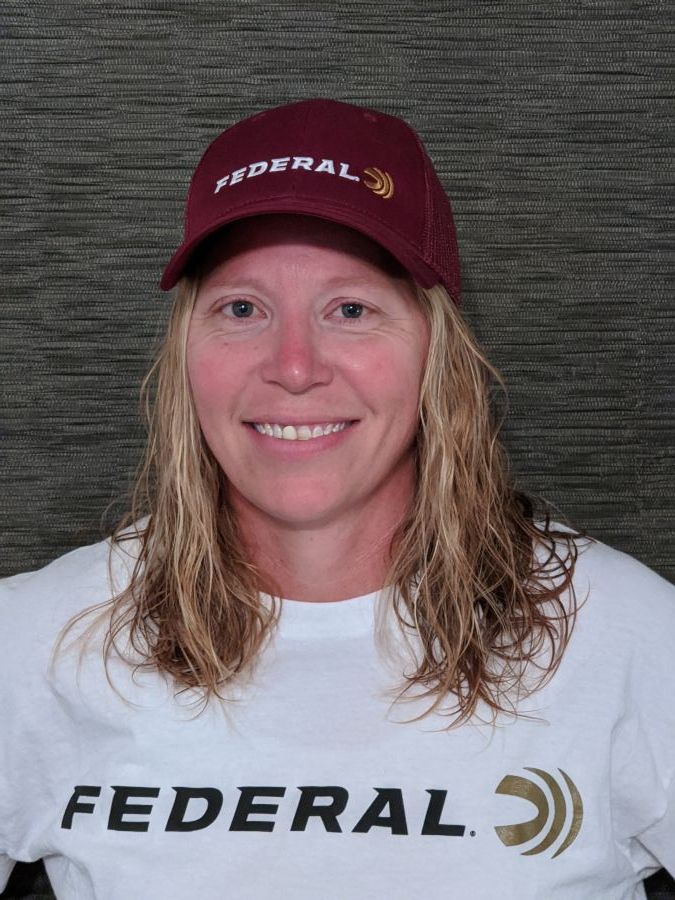 Stacy Rehor won the Winchester Super 500 preliminary singles award with the only perfect 500x500 score. Rehor (Colorado) and Gary Bonetti (California) have been selected for induction into the ATA Hall of Fame for next year, 2022. 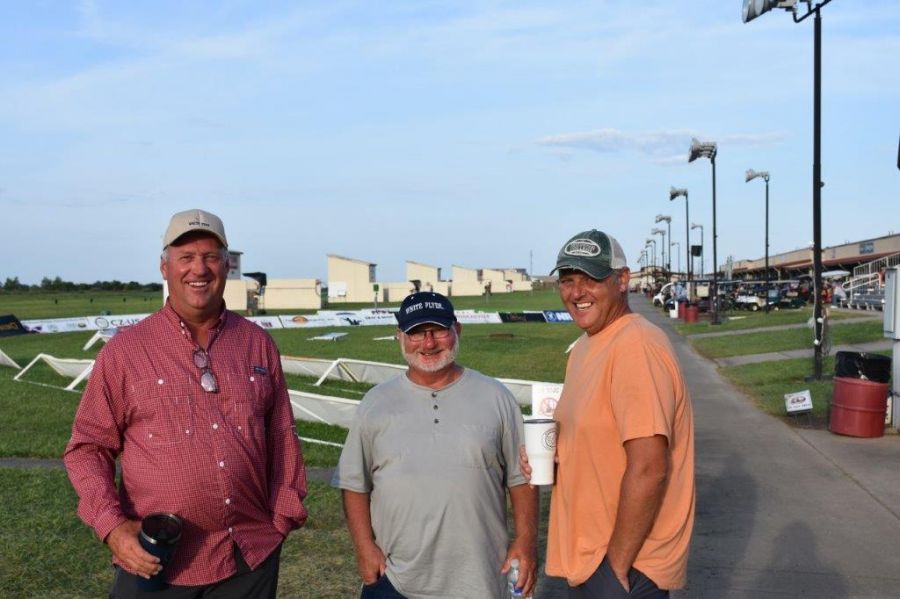 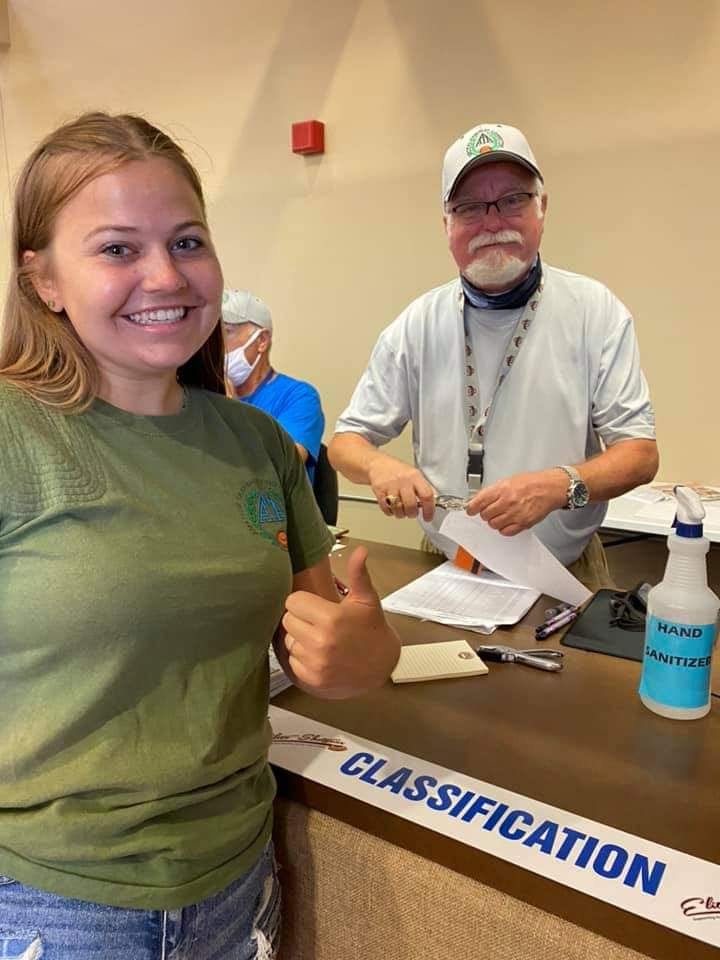 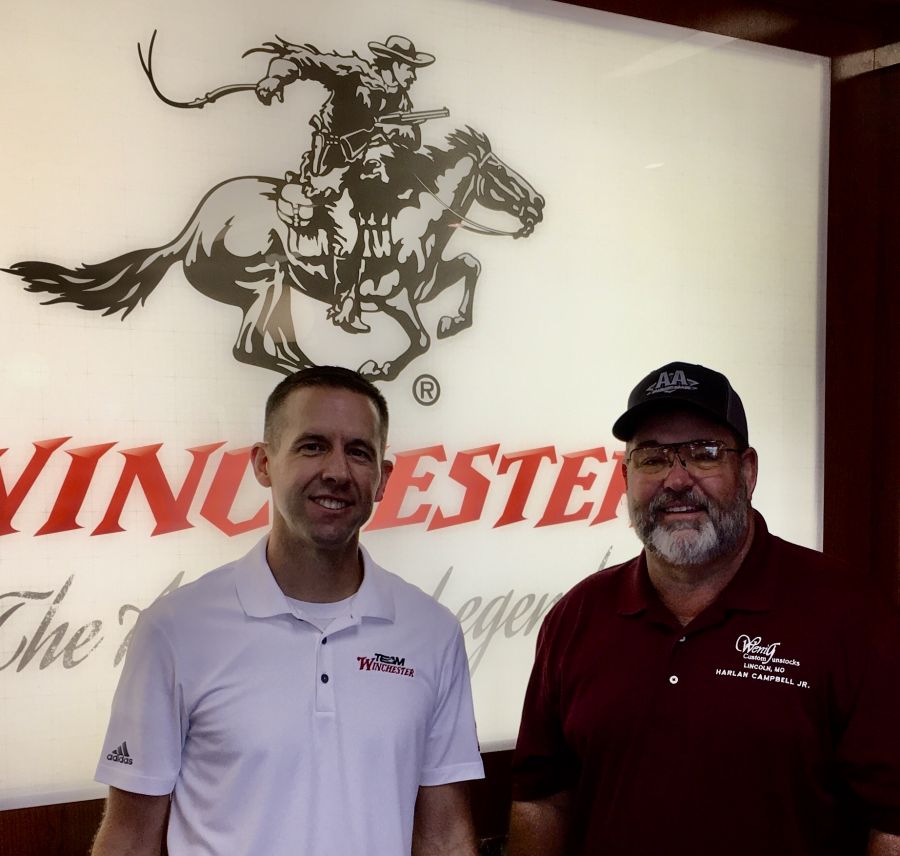 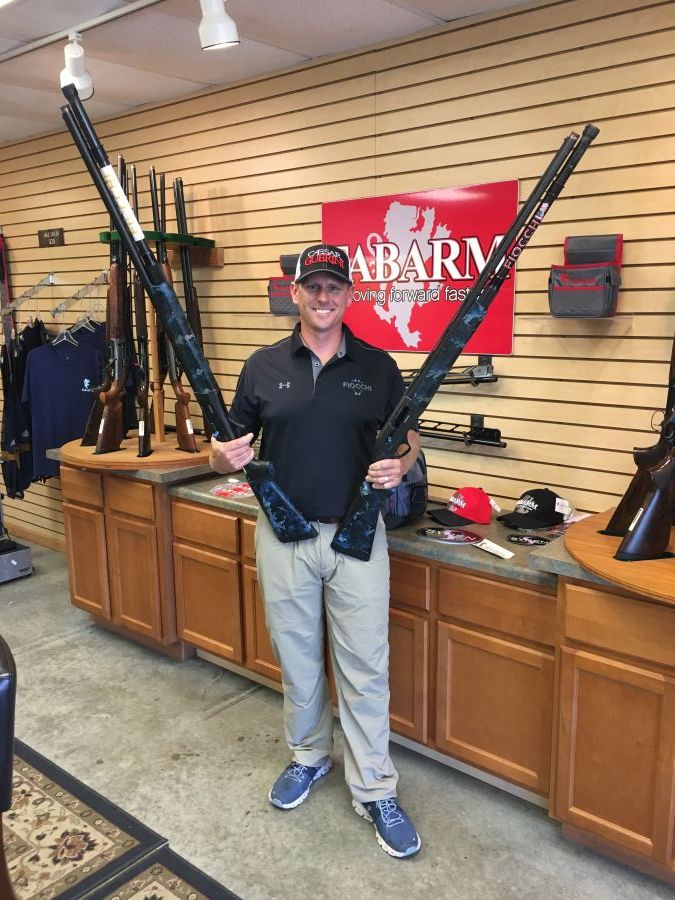 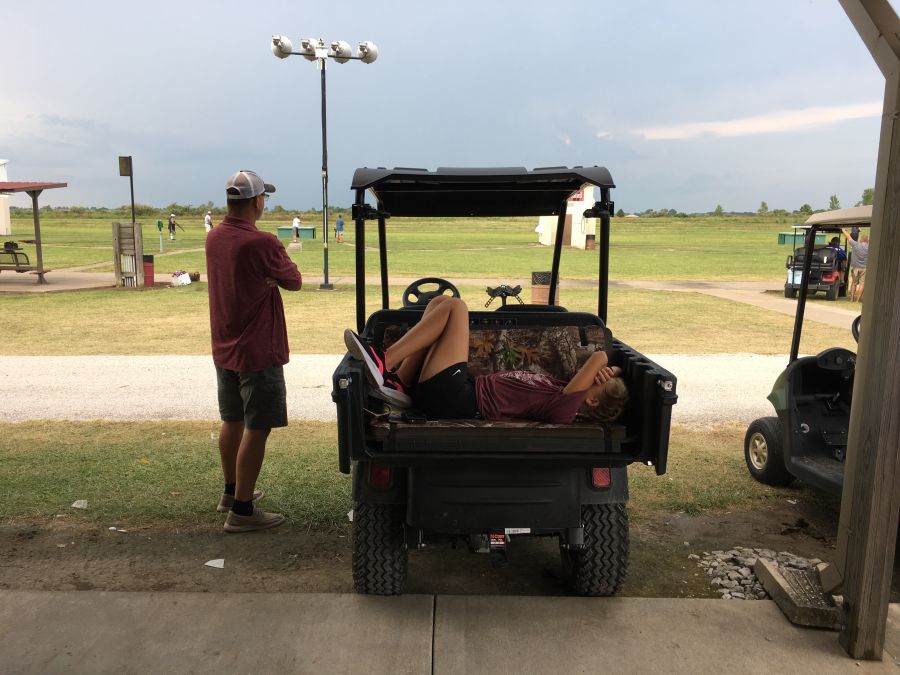 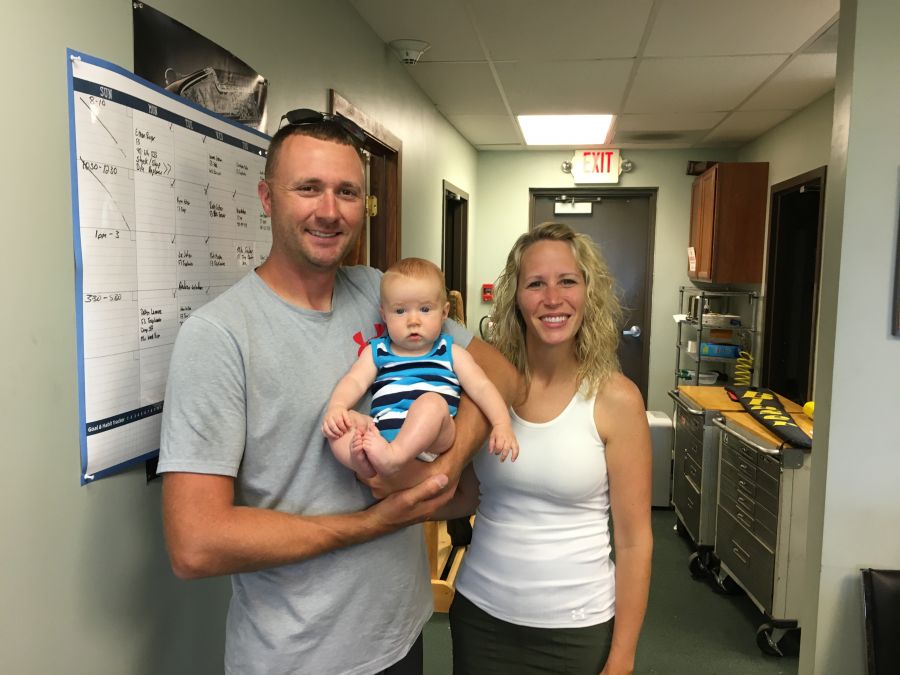 Blaser Team shooter Joe Charnigo, his wife Mandy and their new baby Cooper. Charnigo, who won the ATA World Clay Target Championship in 2019, will soon have the essentials on his Ohio property for shotgun training and entertainment — traphouse and duck pond! 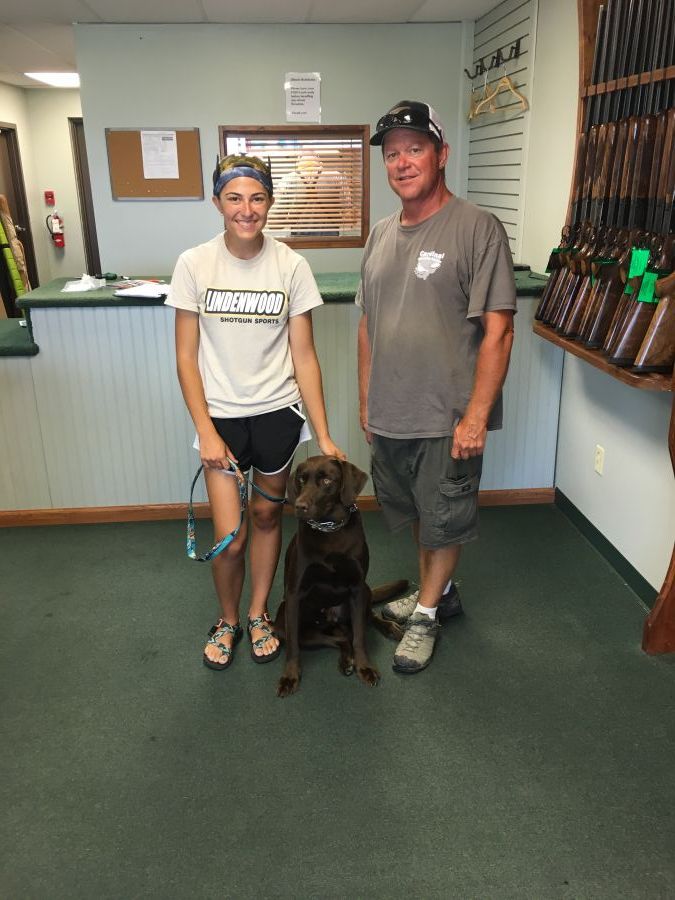 Bailey Lueders and her father Scott from Imperial, MO, and their chocolate lab Moose. Bailey starts at Lindenwood University on scholarship this year. 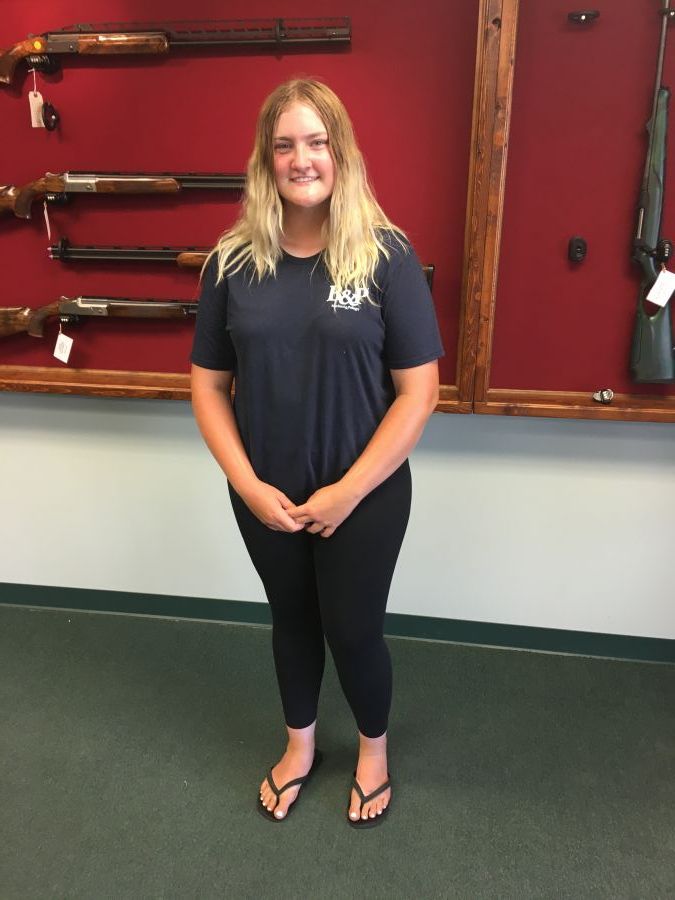 Trinity Morris of South Carolina, a sub-junior who ran her first 50 straight in singles at the Grand, was Class D runner-up in the Sterling Cut Glass Singles and 19-20.5 yard champion in the Trapshooting USA Handicap. She shoots a Blaser F3 with PFS stock. 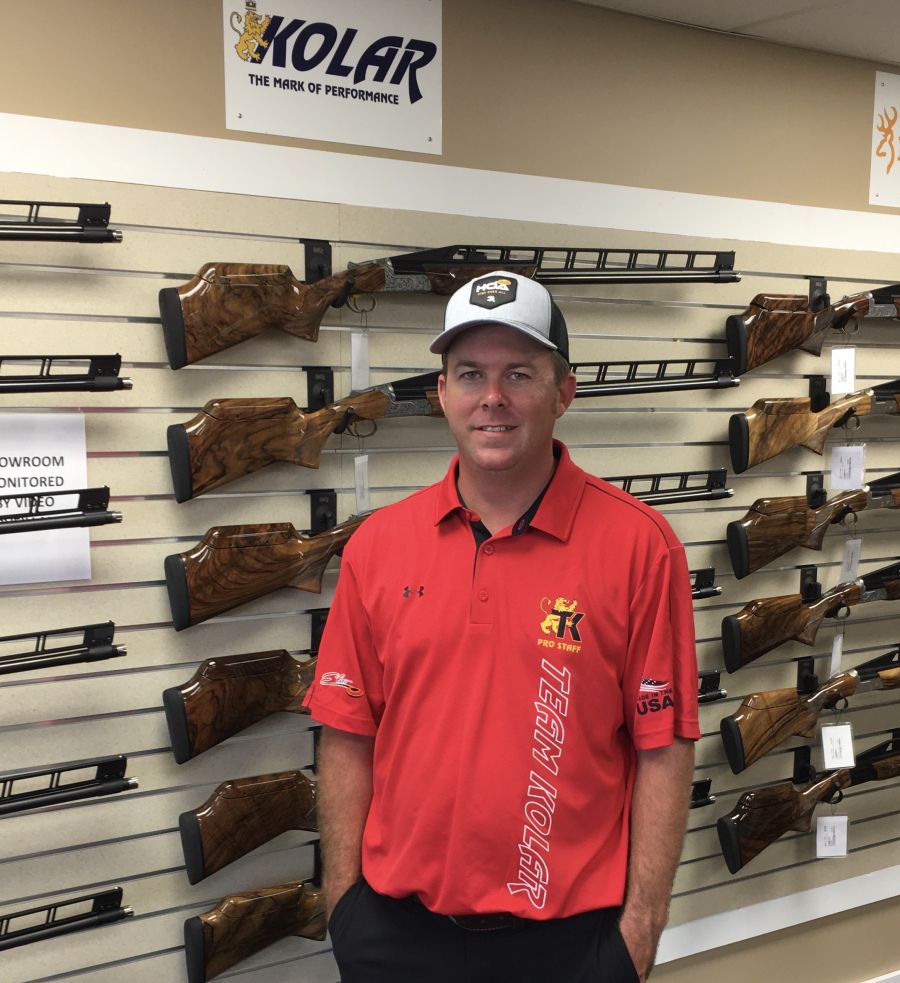 August of 2021 marked the return of the ATA to Sparta, Illinois, to contest both the AIM and the Grand American World Championships. Shooters faced many challenges during the competition. While the Preliminary events were contested in bright sunshine, calm winds and moderate temperatures, Grand Week brought heat indexes around 105-110 degrees with several storms and even one tornado warning, where people who were working in the Events Center were advised to take cover. Storms also postponed the shoot-off for the ATA Clay Target Championship until Friday, the day after the event.

Ammo seemed to be in good supply at the shooting complex but was limited to participants with a paid entry or a paid practice round. As an alternative, many shooters were making the daily trip to the local Wal-Mart at 7:00 a.m. when the store opened. When available, a single pallet or two usually disappeared in a few hours. The last two days of the Grand the shell house opened up to anyone who wanted to purchase ammo, which was limited to a few cases per person. On the first day, the initial line stretched about 100 yards to the west of the shell house as shooters waited patiently in line to buy what ammo was left at the complex.

Covid also became an issue during the main Grand American week. Workers in the Central Entry Building were advised Covid cases were running very high in Randolph and surrounding counties in southern Illinois. Workers in the complex were advised to wear a mask when working in the building, which became a mandate on Monday, the first day of the Grand American. Also, activities in the lobby of the entry building were limited only to those who were there to classify, squad and cashier. A few days later, all vendors who were set up in the lobby, were asked to leave the Entry Building. Despite all of these efforts by both the ATA and the state of Illinois, there were a few workers in the events center that tested positive for the coronavirus later in the week. This prompted the cancellation of several events scheduled to take place during the week, including the ATA Hall of Fame induction ceremony cancelled again this year. (Editor’s note: The Hall of Fame ceremony was to honor Willis Corbett, Mike Fisher, Robert W. Malmstedt and Jennifer Rutger.) The restaurant was also closed the last day as well. Despite all of these challenges, shooters generally had a good time and scores were very high throughout the week.

Grand American attendance was much better than the 2020 Grand contested at Linn Creek, Missouri. The 2021 Sparta Grand had over 1,000 more shooters classified than participated in 2020. However, the Grand at Sparta this year was still down about 5½ percent over both 2019 and 2018. Attendance figures at this Grand were comparable to the 2017 Grand American held in Sparta. Overall, attendance numbers were about as expected, considering the slow but steady recovery shooting has been experiencing this year. I personally believe both the ammo shortage and the increased cost of it played the largest role in dampening the attendance at the Grand American this year. Also, components such as powder, shot and primers were in short supply at the Grand this year.

Dean Townsend attended his first Grand American in August of 1968. In August 2017, he attended his 50th Grand American. He shot his first Grand American in 1970 at 12 years of age. He currently holds five state titles in his home state of Ohio and has been named to over 20 All-Ohio state teams. He was inducted into the OSTA Hall of Fame in 2019. He has also served two terms as a member of the Ohio Trapshooting Board of Directors, as well as two years as Ohio ATA delegate; been a member of eight different ATA All-American teams including, Sub-Jr, Men’s second team and both 1st and 2nd Sub-vet teams. In 1993 he was appointed to the ATA Central Handicap Committee by then President Jim Bradford. He served in that position for 17 years until 2010. At that time, he was asked to serve as Chairman of that committee, a position he currently holds. He is also a six-year member of the ATA rules committee. During the past four years, he has been a member of Blaser-USA's pro-staff, assisting with customer service issues and helping shooters set up demo guns at several major tournaments around the country. He retired after 35 years of teaching high school and college chemistry in May of 2015.